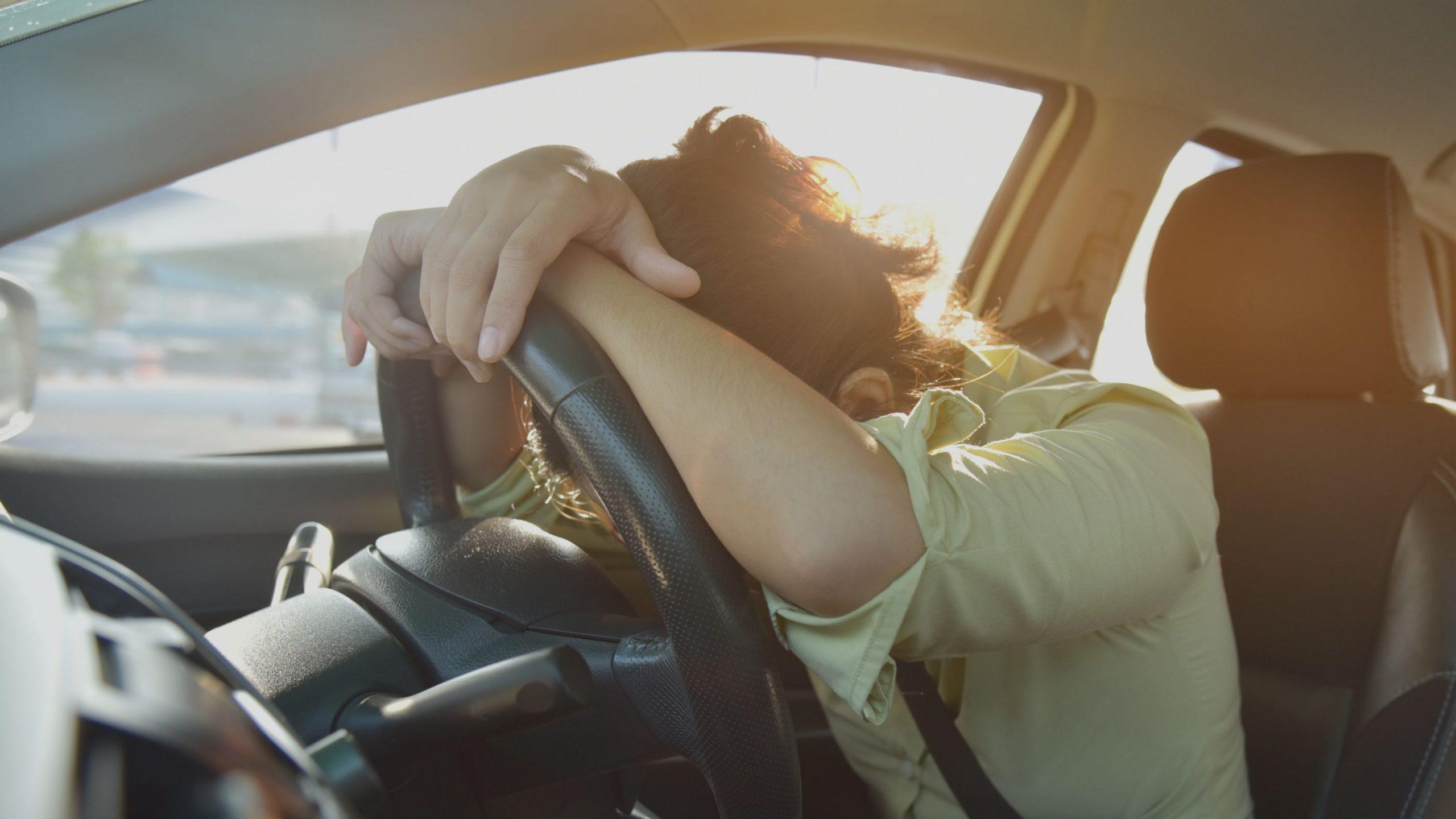 Drowsy driving is when a person operates a motor vehicle while sleepy. It makes the driver more likely to make mistakes. Drowsy driving can considerably increase accident risk, leading to alarming cases of injuries and deaths yearly.

With the widespread sleeping issues and disorders among adult men and women in the US and Canada, greater awareness of drowsy driving can play an essential role in public safety. If our drivers understand the causes and consequences of these issues, the number of car crashes will be decreased significantly.

What Is Drowsy Driving?

Drowsy driving is a profound impairment similar to alcohol-impaired driving and can lead to falling asleep behind the wheel. Driving when you’re sleep-deprived may have catastrophic consequences. Sleepiness can dull your reflexes and impair cognitive functions.

Drowsy driving can adversely affect cognitive function, judgment, and decision-making skills. If your reaction time slows down and your attention lapses, you’re less likely to react in time.

People Experience Microsleeps Without Realising It

Microsleep is even more alarming than drowsy driving. Microsleeping refers to being tired enough to doze off for a few seconds unknowingly. Some people think this short period doesn’t mean anything. But, when cruising at 65 mph on a highway, even a small fraction of a second can mean life or death.

Losing consciousness for a few seconds is enough for your car to travel more than 150 yards, which is plenty of distance for a fatal crash upon impact. As a result, sleep-related vehicle accidents account for many rear-end and head-on collisions.

However, when fatal traffic collisions occur, it’s complicated to determine if the cause was due to drowsy driving.

During a vehicle collision, the process of investigating, analyzing, and forming conclusions is known as “traffic collision reconstruction.” Through this process, Roar Engineering Accident Reconstruction Service reconstructs accidents and completes detailed diagrams of the accident sites.

There’s no exact way to measure drowsy driving. Nevertheless, research demonstrates how disturbingly common it is. Recent studies show that an astonishing 60% of adult drivers drive while tired or sleepy.

The Dangers of Drowsy Driving

Driving while drowsy is one of the leading causes of motor vehicle accidents. Over 91,000 crashes were caused by drowsy driving in 2017, causing 50,000 injuries and 800 fatalities, officials reported (NHTSA).

It is calculated that drowsy driving causes as many as 6,000 fatal crashes yearly. And scientists estimate that around 21% of lethal car crashes occur when the driver feels groggy.

But we believe this data somewhat underestimates the impact of drowsy driving because it’s often impossible to determine precisely whether drowsy driving caused a motor vehicle collision, especially after fatal crashes.

Why Drowsy Driving is Dangerous

Drowsy driving can exponentially increase the risk of traffic collisions. Microsleep occurs when you doze off for just a few seconds. When these brief, fleeting episodes of sleep happen, it’s easy for their car to collide with another vehicle or run off the road. The damage resulting from these collisions usually increases at high speeds.

Driving while drowsy is dangerous, regardless of whether the driver falls asleep. According to recent studies, Sleep deprivation can lead to mental impairment similar to that caused by alcoholism. Surprisingly, sleeping less than 24 hours equals drinking roughly 0.10 percent alcohol.

This impairment can make people distracted and pay less attention to their surroundings. It slows their reaction time, making it more challenging to avoid dangers on the road. Lack of sleep is also related to poor decision-making, leading to reckless driving.

Vehicles can catch fire after a drowsy driver crashes into various objects, such as a light pole. Gasoline engines, diesel engines, batteries, and hydraulics are prone to fire. And if car accidents happen in harsh environments and operating conditions that may facilitate fire initiation, consequences can be unforgettable.

The Main Causes of Drowsy Driving

Drowsy driving can happen to anyone who’s behind the wheel, but certain people are at higher risk of auto accidents related to drowsy driving, including:

That said, multiple factors can result in drowsy driving.

How to Prevent Driving While Drowsy

There are several steps you can take to avoid drowsy driving dangers.

When Should You Stop Driving To Rest?

If you notice any of the following signs of drowsy driving, you need to look for the next available opportunity to have a break (take a walk or rest).

Those signs tell you that you’re drowsy and may be at risk of an accident if you continue driving. You should pull over or exit the road and rest until you are not feeling sleepy.

So we’ve learned that there are severe consequences to driving while tired. But if you need another incentive, driving while sleepy is illegal in Canada and, if found guilty of an accident, will result in serious penalties.

Driving while tired is not illegal, despite the well-documented dangers, but it has grave consequences. The government has heavily invested in awareness campaigns and legislative acts to educate drivers about the dangers of fatigued driving.

Drowsy driving can happen to anyone, such as yourself. To avoid such drowsy driving, practice the short and long-term measures we’ve mentioned. With planning and foresight, you can keep drowsiness at bay when operating your vehicle.

If you get drowsy while driving, it is best to pull over, get out of your car, and walk around. If you have further questions, please don’t hesitate to contact us and speak with our expert team. They will gladly help you out.

How Can I Avoid Falling Asleep When Driving?

Why Do I Get Sleepy When I Drive?

There are many reasons drivers get sleepy when driving for more than a specific time interval. Examples include car vibrations, monotonous roads, or dehydration. While drowsy driving can be hard to avoid, especially during long-haul trips, sleeping while driving is dangerous.

Drowsy driving is the dangerous blend of sleepiness or fatigue while driving. It usually occurs when drivers do not get enough and still drive. Other causes include drinking alcohol, untreated sleep disorders, medications, or changes in a work shift.

Why Does Driving Make You Tired?

Experiencing tiredness from driving for too long is normal! Driving can tire you since it requires a lot of brainpower to multitask. Also, tiredness can result from underlying causes, such as sleep deprivation, dehydration, or boredom.

Recent studies show that something in driving can make even the most alert people feel tired. It’s all to do with the car’s vibrations as it moves, which can bring on sleepiness in just 15 minutes. When you’re drowsy, it doesn’t take much to start nodding off, and the gentle vibrations made by your car seats as you drive can lull your brain and body.

What Causes A Person to Fall Asleep While Driving?

Drowsiness and the necessity of sleep while driving can be caused by the following:

Driving can be mentally and physically tiring, especially at night. This exhaustion can often be due to a combination of factors, including lack of sleep, driver fatigue, or even certain medications.

Recent studies have shown that the low-frequency vibrations of cars can make drivers tired and drowsy– if you’ve ever soothed a baby with the hum of the tires on the road to sleep in a car, you can relate!

What Is Microsleep While Driving?

Microsleep is an uncontrollable, fleeting, brief episode of sleep which can last anywhere from a few fractions of a second up to ten seconds. These microsleep episodes occur most frequently when a sleepy person tries to combat sleep and remain awake. Microsleeps may occur while driving and increase the risk of a severe car accident.

What Are the Potential Signs of Experiencing Microsleep?