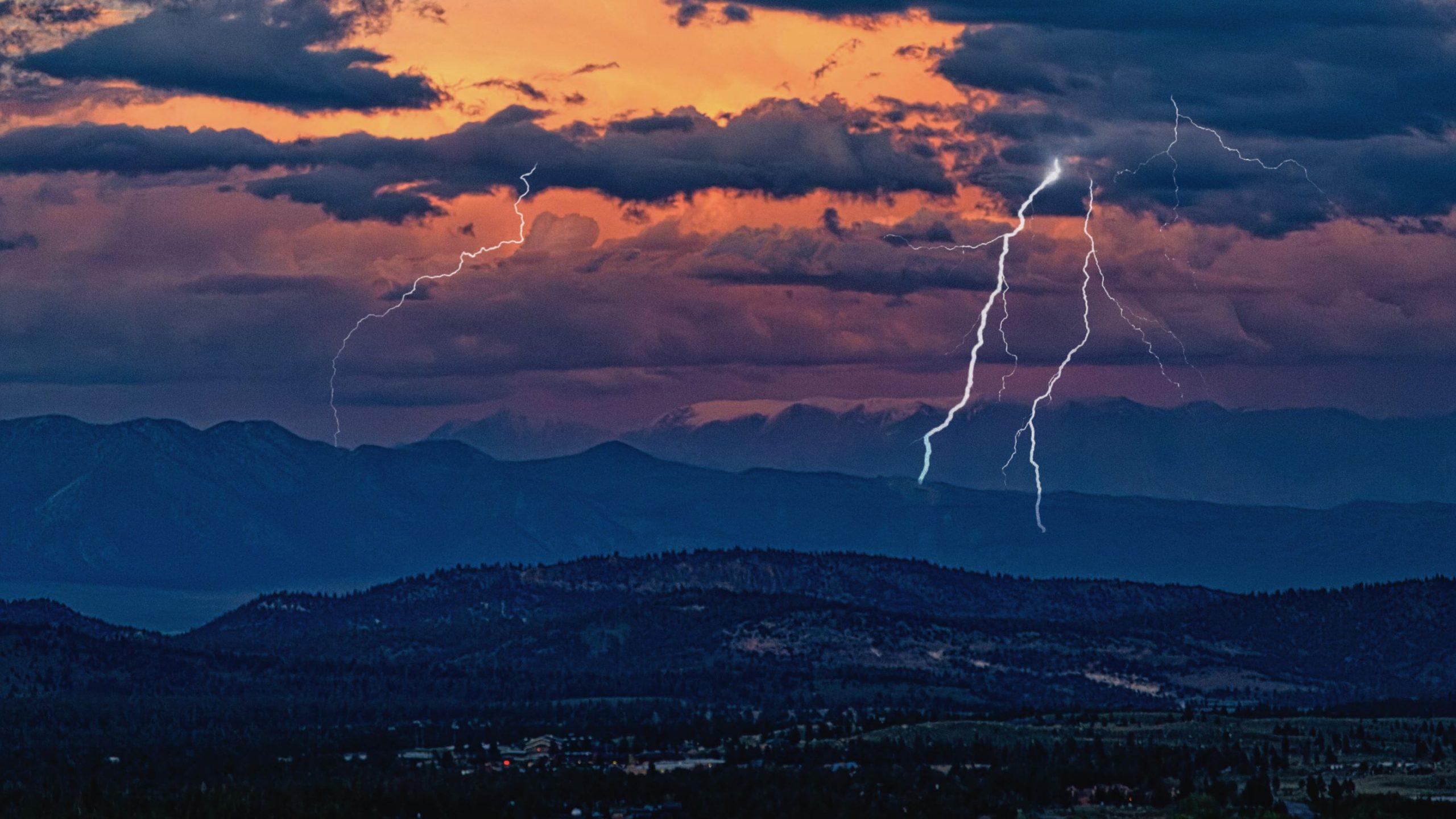 Lightning Facts: What You Should Do During a Lightning Strike

In Canada, thunderstorms cause between 100 and 150 severe injuries and ten fatalities yearly (even more than hail). Additionally, 90% of forest fires in the boreal forests of northern Canada and Alaska are triggered by lightning.

Lightning bolts are lethal. Their energy of one billion volts is a million times greater than the typical household current.

While the odds of getting struck by a lightning bolt is about 0.0065359%, we live on a planet where a thunderstorm can strike anywhere at any time.

Sometimes, “anywhere” is where you are taking a walk outside, and “anytime” could be when you are resting in your house. So read on to learn about the dangers and different types of lightning damage, some thunder facts, and additional safety tips.

Note: Make sure you check our blog post if you’re curious about which natural disaster causes the most damage in Canada.

What Gives Lightning Its Zap – Facts about Lightning

Scientists have some plausible theories about what triggers flashes of lightning. Although the research into this powerful force of nature is ongoing, here’s what we know so far.

Lightning can strike in sandstorms, wildfires, and eruptions of volcanoes. As a result of such conditions, particles like sand, fumes, and ash can become electrically charged, causing atmospheric conditions similar to thunderstorms.

In the most common example, atmospheric moisture builds up to create clouds as part of the water cycle. Millions of water molecules and ice crystals make up storm clouds, which start moving slowly but accelerate as they rub against one another.

As ice crystals crash into each other, they exchange electrons. The cloud is divided into positive (+) and negative (-) charges.

The majority of lightning bolts are negative strikes. The lower part of the cloud receives a negative charge following the “opposites attract” rule. Think of magnets. When two objects have opposing charges, they attract each other, while those with the same charge repel one another.

In this case, the ground’s positive energy attracts the negative energy of lightning. The result is clouds begin to charge up like huge batteries in the sky, with the upper part becoming more positively charged and the lower part more negatively charged.

Then, stepped leaders happen. If you watch a lightning flash video on slow-mo, you’ll notice that the ground also sends a flash of light to meet the clouds halfway. And that’s how lightning strikes.

Usually, one of two things will happen to electronics when lightning strikes. In the first case, the house is hit directly by lightning, which is extremely rare. Items in the home, both electrical and nonelectrical, will sustain significant damage from a direct lightning strike.

This causes a fire, often triggered by the wiring that runs along walls or in the attic. In some cases, the windows or your house foundation may also sustain structural damage in addition to the roof and chimney.

The more frequent occurrence is for pipes or wires that extend outside the house to receive lightning damage and carry it into the house. The lightning strike’s energy can travel through communication wires (like internet or telephone lines), conductive metal (such as pipes), or a utility pole.

Unlike direct strikes, damage from an event of this kind is typically less severe. Now, what happens to your appliances once lightning strikes?

A house’s electrical system is one of the most likely entry points for higher voltage from lightning or surges. Lightning that hits a neighboring power line follows the least resistant path into your home’s electrical panel by first passing through the meter.

The surge will halt if the electrical panel has a whole-house surge prevention mechanism.

But the insulation and wires might be melted and scorched if it doesn’t. Additionally, it can harm electrical devices not plugged into a point-of-use surge protector by passing through the wire to the outlets.

Determining the extent of the damage can be challenging (and expensive) because the wiring is inside the building’s walls. Roar Engineering’s structural engineering service can help you with that problem. Our structural experts can also scope the extent of damage caused by lightning or fires and help you prevent them in the future.

Lightning can seriously damage any electronics not correctly connected to a surge protector if it strikes your home’s wiring or communication cables.

This is mainly because of an integrated circuit widely used in consumer electronics like computers, televisions, and gaming consoles. This circuit is highly vulnerable to damage from the voltage overload brought on by surges.

Remember that if the cables are not securely connected to a surge protector, the overvoltage could enter the device to which they are directly connected and harm the circuit board.

Whether a large appliance uses mechanical or electronic controls will determine its vulnerability. In most cases, a device with a mechanical control can withstand a surge without being harmed.

However, such incidents may still break the appliance if a lightning bolt directly strikes a power pole or building.

Large electronic appliances are much more susceptible to surge damage from a lightning strike than smaller ones. An appliance’s control board may sustain surge damage if the surge travels through the appliance’s wiring to the outlet it’s plugged into.

The pool and irrigation equipment are connected to several pipes, which offer an unobstructed route to the system’s electronic controls unit (ECU).

Unfortunately, in most cases, these controls are made up of solid-state components, making them highly vulnerable to sudden changes in voltage. Thankfully, specialized surge protectors can protect these pricey pieces of equipment from lightning damage.

Due to the high temperatures that follow lightning strikes, any flammable material inside or outside your home may suddenly catch fire.

Our expert team of fire and explosion engineers know very well how strikes can start a fire immediately, as lightning can ignite some materials by passing a current through them that heats them to combustion.

Stone-coated steel or metal roofs are incredibly fire-resistant and can help protect your home from lightning damage, even if it seems counterintuitive. However, a lightning rod and grounding system can help direct and dissipate the charge if you have an asphalt or wood roof.

Those who work outdoors (for example, construction workers, road crews, gardeners, and farmers) should know what to do when lightning is close. This doesn’t mean, however, that people at home are always safe and need not worry about safety measures.

In the event of lightning storms, you can take several preventive measures to keep yourself safe.

Always look for a suitable shelter inside a building or a vehicle. Being in a car keeps you safe because the lightning will pass by its surface and strike the ground. This happens due to the car’s role as a faraday cage.

Since metal is a good conductor, it would guide the current around the objects and safely discharge it to the ground.

Avoid taking shelter beneath trees. Trees are lightning magnets. “Step voltage” dictates that only one point of contact between your feet and the charged ground should exist. This rule applies to any situation where your body is in direct contact with any current: never lie on the ground.

Don’t pick up the phone. Instead, use a cell phone or a cordless phone if you must get in touch with someone. If lightning strikes the phone line, the energy will travel to every phone on the line, including the phone you hold if it is connected to the line.

Keep your distance from the plumbing pipes (bathtub, shower). Lightning can transmit the electrical charge to the metal pipes used for plumbing if it strikes a house or is in the immediate vicinity of a home.

Luckily, with the widespread adoption of PVC (polyvinyl chloride) in recent decades as a material for indoor plumbing, the danger posed by pipes is significantly reduced. However, if unsure of your pipes’ material, ask for a professional’s help.

Lightning strikes can be far more lethal than you imagine. Electrical failures can result in severe injury and unimaginable damage to appliances, which is why detecting equipment and battery failures is so important.

Roar Engineering electrical engineering services offer the help of experts like Jason A. D’Ornellas, P.Eng, who has the required knowledge and experience to investigate cases like:

Natural forces are uncontrollable, and you never want to find yourself in a tight spot without any idea what to do. Educate your family members about all safety protocols and pass them along to keep them safe from lightning storm threats.