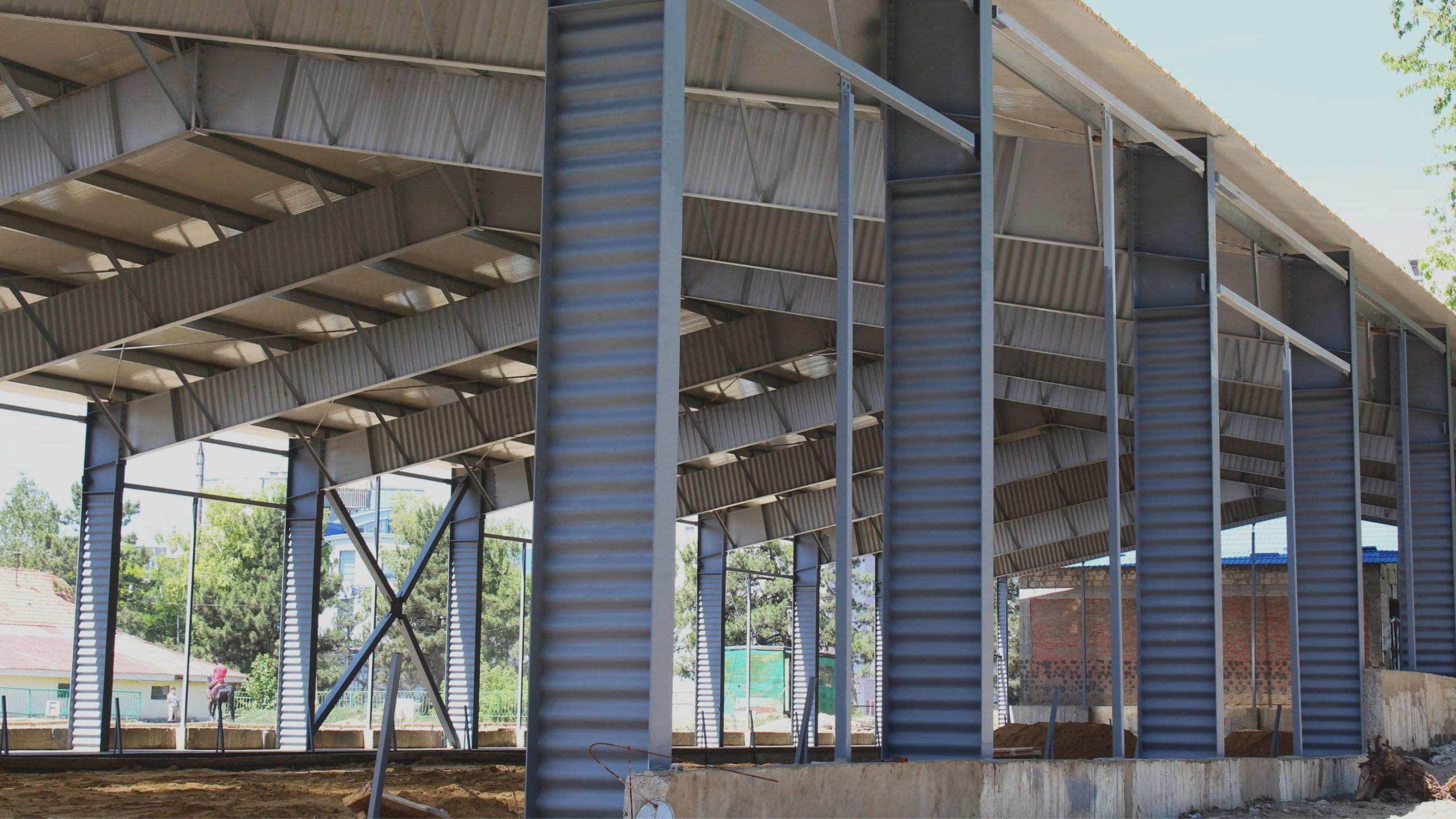 What are Beams and Columns in Structural Engineering?

In the comparatively brief history of our civilization, we have achieved numerous civil engineering achievements and marvels, ranging from the prehistoric Pyramids of Giza to the modern Petronas Towers.

Taking a step back, however, we must understand the structural mechanisms that led to these advancements.

Structural engineers must consider various factors when attempting to bring structural plans to life. Stability will be one of the most crucial factors to consider, especially when it comes to ensuring structures are safe and long-lasting.

Columns and beams are two fundamental structural elements that are essential to stability. They support the weight of the building and create a safe load path, transferring the weight and forces applied to the structure of the building to the foundation and the ground.

In this article, we examine columns and beams and analyze why they are essential elements in structural engineering.

An Introduction to Columns

Many ancient civilizations used to employ a system of columns and beams.

The Minoans used complete tree trunks (flipped upside down to prevent regrowth) on a stylobate (floor base) and topped with a simple sphere capital. These were then painted like the palace of Knossos.

Later, Mycenaeans retained these customs, especially in the palace megaron. Symbols, like Mycenae’s famed Lion Gate, show the importance of columns and their connection to palaces and other places of authority.

Since they were built of wood, the early columns have not survived, but their stone bases have. Thanks to them, we can see how columns were used and arranged in these palace structures.

Columns are structural elements that transmit loads from a structure’s slab (the roof or upper floors) to its foundation and the ground beneath it. Often, they are vertically oriented.

There are two main types of loads: dead loads and live loads.

Live loads are temporary loads that can be applied on and off the structure of the building and have a change in position.

In contrast, dead loads are fixed loads from permanent attachments. In other words, any load on a structure that does not fluctuate over time in size or location is considered a dead load. It is also known as a permanent or static load.

The amount of the axial loads on a column is the main factor determining its size. The following are a few examples of loads that need to be calculated:

In terms of column types, there are quite a few. Below is a list of some of the frequently used column types:

There are two types of concrete columns: rectangular and circular. The rectangular sections have a minimum horizontal design width of eight inches (8″).

According to the standard set out by the American Concrete Institute (ACI), these columns that are subjected to torque moments to withstand earthquake pressures, wind forces, or dynamic loads are required to have a horizontal section that is more than ten to twelve inches (10 “-12”).

For the circular sections, the column area susceptible to static stresses must be less than 100 square inches, and the minimum design diameter of the column should be twelve inches (12″).

Columns that serve no practical purpose other than aesthetics do not have to meet the basic requirements of the code.

The horizontal sections of steel columns can be divided into three types.

C-section: These columns have three sides and are made of thin steel. Compared to other steel columns, they are typically weaker but more economical. The load burden, problems with high winds, and the building process are some of the difficulties associated with C-section columns.

I-section: These columns consist of two flanges joined by a single vertical component called the web. They take on either an “I” form or an “H” shape when viewed from above. Some codes also refer to these columns as the “W” section.

Their application in construction is based on tension, deflection, bend, vibration, and buckling. When subjected to extreme pressure, I-sections can flex rather than buckle.

RHS columns are capable of supporting more loads and strains. As a result of their uniform shape, these columns have the same amount of lateral strength in every four directions.

Galvanized steel columns coated or filled with concrete are known as composite columns. These columns are typically utilized when they must support heavy weights or when further corrosion or fire protection is required.

Usually, multi-story buildings and industrial facilities are constructed using these columns. Composite columns can lower the area of the column section, even though they are not very visually appealing.

Train tracks were initially made of prismatic wood pieces with a metal band at their extrados that served as a rolling plane for the tracks.

Cast-iron components with an embryonic I section composed of two bulbs. The English engineer William Jessop introduced a web in 1789 as a more durable alternative to these designs.

When the first hot-rolled steel was introduced, it entirely replaced the usage of cold-rolled steel. This had two reasons: the production process’s low productivity and the reduced tensile strength.

At first, the original iron or laminated steel rails underwent a rapid evolution, achieving the current design known as the Vignoles rail in 1831 by American colonel Robert L. Stevens.

Shipbuilding and civil engineering also began using the I profile simultaneously with railways.

Taking advantage of Eaton Hodgkinson’s work as a scientific consultant, Sir William Fairbairn conducted theoretical and experimental studies in the 1930s to determine the best profile for both cast iron full beams for rail crossing and hot-rolled steel reinforcing.

The findings of Fairbairn and Hodgkinson were extremely valuable in civil construction, particularly in the construction of long-span bridges.

James Watt introduced the T-section in early 1800, which was replaced by the hot-rolling process in the mid-nineteenth century with I profiles, which replaced the wooden rectangular or circular members and the cast iron T-sections previously employed.

Beams are structural components that help transport loads from the slab to the columns. This indicates that transfer beams are set up to transfer the weight from one load-bearing wall to another. They are usually horizontal structural members.

A beam’s function is to support walls and prevent overloading a concrete slab. In construction, beams are used to reinforce columns, resulting in an ideal distribution of the bending force in the beams and less bending in the columns.

You can also help define the length and width of the beams by calculating the load transmitted to the beam to sustain the width between them. Calculating the internal forces acting on a beam determines its dimension.

The following are examples of internal forces:

Beams can be divided into two types based on their structure. These are some examples of them:

There are several types of concrete beams.

Simply Supported: A beam that rests freely on both ends on its supports is known as a simply supported beam.

Hidden: Beams are concealed within concrete slab thicknesses. In other words, the width of the section is greater than the depth.

Cantilever: Usually, these beams have one end that is fixed and one end that is freestanding. The material is commonly used in bridges, trusses, and other structural components. These beams support loads subject to bending moment and shear forces throughout the span.

Vierendeel: These beams are employed in rooms with a lot of open space. Each of the rigidly connected parts of these structures should transmit bending, shear, and direct loads.

Fixed: A fixed beam is one whose two ends are attached to or integrated into walls. A built-in or encased beam is another name for a fixed beam.

In terms of type, steel beams can be divided into four categories:

C-section: The C-section beam has two flanges and three sides. There is a lip at the tip of the flange, giving it the unique c-shape.

I-Section: There is high resistance to bending in I-section beams. Usually, the load is applied to the top of the flange while the tension area is at the bottom of the flange.

T-section: These beams are similar to I-section beams but have only one flange.

L-section beams: These beams have half a flange along one side and are shaped like an “L.”.

The lack of lateral reinforcement easily leads to severe damage to columns during natural disasters like earthquakes. Roar Engineering Structural Engineering Services employ experts’ specialized knowledge of building construction issues to provide you with what you need.

The structural experts at our company can evaluate the devastation caused by fire, explosion, or other destructive forces.

Last Words on Columns and Beams

We hope this article has given you a better understanding of what columns and beams are in a structure and building and why they are crucial structural elements engineers cannot overlook. You may also find it helpful to read Canadian Forensic Engineering in a Downward Spiral.

If you encounter any problems or need further assistance understanding the structure of buildings, feel free to contact us. Our expert team in structural engineering has professionals like Stephen Côté on board, who will do their best to solve your problems.

What is Meant by Beams and Columns?

A system of columns and beams transfers weight from slabs to beams and finally to column cores to provide final support. This works as a mechanism to counteract any horizontal loads that the structure of the building receives.

What are Columns in Structural Engineering?

A column is a structural component that transmits loads from a structure’s slab (the roof or upper floors) to its foundation, which is then transferred to the ground beneath.

What Are the Four Types of Beams?

It is possible to categorize steel beams into four types based on the shape of their horizontal sections:

Where Do We Use Beams and Columns?

Columns should ideally be placed at (or close to) a building’s corners and where beams and walls meet. Most of the time, beams are put under the walls of heavy, concentrated loads so that these loads don’t go directly on slabs.